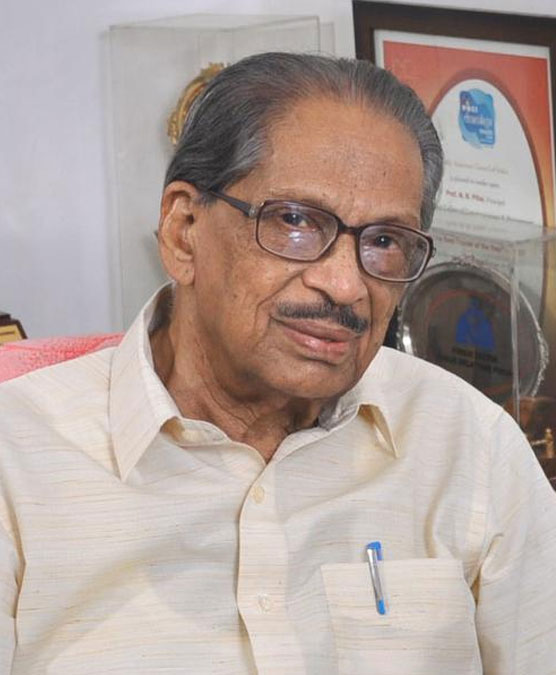 Professor Omchery was born in Vaikkom, in Kottayam district of Kerala as the son of Omchery Narayanan Pillai and Pappikkutty Amma. He started writing poems at a very young age. He did his schooling in Vaikkom English High School. After completing his education from the University College, Thiruvananthapuram, he started his career as a journalist, in Malayala Rajyam, in pre-Independence Travancore state. He joined the Information Service of the Government of India joining the news department of Delhi All India Radio in 1951. He has served in DAVP, and Chief Censors Office. He later headed the Malayalam unit of All India Radio. New Delhi. He was also the Editor of the Department of Publications of the Ministry of Information and Broadcasting. He was also the Editor of Yojana and Professor and Course Director at the Indian Institute of Mass Communication and General Manager, Public Relations at the Food Corporation of India.

Professor Omchery had been a communication consultant to the World Bank, the UNESCO and the British Council. He has also worked for the development works for several states of India. He has a lifelong association with the Ramakrishna Mission ever since he was an inmate of its ashram at Kaladi.

Even though ‘Notice Venam’ (Notice is wanted) was the first play that Omchery wrote when he was a student at University College, and staged at VJT Hall in Thiruvananthapuram, his first attempt as a professional came much later.

Professor Omchery wrote his first play Ee Velicham Ningaludethakunnu (This Light is Yours) in 1952 at the behest of A. K. Gopalan who was then the Leader of Opposition in the Indian parliament. Members of Parliament K. C. George, P. T. Ponnoose, E. K. Imbichi Bava and V.P. Nair, and Rosscote Krishna Pillai, among others, acted in the play. Omchery has written nine full-length plays and more than 80 one-act plays. He founded the theatrical organisation ‘Experimental Theatre’ in 1963. DC Books published a collection of his 26 selected plays on November 27, 2011.

His famous play ‘Thevarude Aana’ highlights the unenviable circumstances of the temple elephant – a symbol of prestige, but one which suffers silently. Using the elephant as a metaphor for the human condition Professor Omchery posited contesting claims of religion and modern medicine to highlight this. The play was translated into English and, later, into Hindi and other Indian languages, by the National Book Trust (‘Mandir ka haathi’). In Delhi it was staged on three consecutive days with good audience response.

He has written nine full-length plays, more than 80 one-act plays and a few novels. His plays are noted for their bold experiments in form and technique as well as the uncommon vision inherent in many of the themes.

Professor Omchery draws on typically Keralite themes and yet successfully connect with audiences in other Indian States. These points to the all-embracing quality in the themes he chooses. Contradictions in human nature, social evils and the flawed human situation come through in his plays with the laugh-a-while-at-your condition, and introspect -if-you-will attitude.

Professor Omchery has won the Kerala Sahitya Akademi Award twice: in 1972 for the play Pralayam and in 2010 for his overall contribution to Malayalam literature.

He is married to Leela Omchery who is a well-known singer and sister of famous Malayalam singer, Kamukara Purushothaman. Leela Omcheri is from the Mankoyikkal Nair Tharavadu in Thiruvattar, near the Aadhikeshava Permual Temple. Leela Omcheri was Professor of Music at Delhi University.

The couple’s son, Sreedeep Omchery was ex-director of the DCM Group and is at present a reputed management consultant. Their daughter, famous classical dancer, Deepti Omchery Bhalla, is Dean of Music and Fine Arts Department at Delhi University. The couple lives in Delhi.